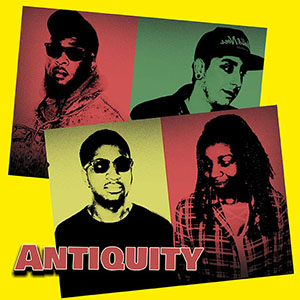 Antiquity are a three-piece acoustic original/covers band based in Birmingham, UK. The band has been travelling and performing together for three years, playing festivals, pubs and parties across the country. They create their unique sound combining acoustic guitar with bass and cajon drum to deliver a sound that is both instantly recognisable and loved throughout the UK.

As an original band, Antiquity are heavily influenced by reggae, soul & funk artists. These influences come together to deliver music that is unlike anything out there today. Since signing with GT’s records in 2017, their music is steadily gaining popularity and with their debut EP due to be released soon, Antiquity are soon to be the name on everybody’s lips in the coming months.

As a covers band, Antiquity perform a wide variety of music, old and new, to satisfy every audience at any venue. The band have played in pubs all over the country, and performed at festivals including The Great Dorset Steam fair, the biggest festival in Europe. Since the band’s formation back in 2014, Antiquity have quickly become one of the leading covers/originals bands in the Midlands.

I D @ID
Read More
Lovely ambience with African theme indoor and outdoor restaurant decor with various plants, pots, African jewellery and African clothes amongst other things to buy. We had curry goat with rice n peas and homemade cakes - various cakes to choose from. Staff was friendly and polite. Food was lovely and would definately come here again. There is also various facilities/things to do for children and on set days mainly at weekends they have various reggae, soul and jazz concerts/festivals.
Jessica Henley @Jessica Henley
Read More
If you love the feeling of being abroad then this is the place for you. With the sound of tropical birds, tropical trees & plants, a beach to chill on, decent African food, drinks & cocktails. Amazing African style entertainment
Lindy Nic Thoirealaigh@ Lindy Nic
Read More
Amazing place. Delicious food. We got to handle to reptiles and see all the beautiful birds. All the animals made out of recycled cars are amazing. Felt like I was on holiday. We can't wait to visit again.
Megan Astin@ Megan Astin
Read More
Beautiful place, feels like your on holiday in Africa, kids loved the sandy beach area too, and the eatery is stunning, cant wait to experience a night out on one of the themed nights here, absolutely love the place. The tropical house and reptile house is great too, good value for money, I definitely recommend Akamba to families and also its dog friendly too as I noticed 2 dogs visiting and water bowls around too.
Previous
Next